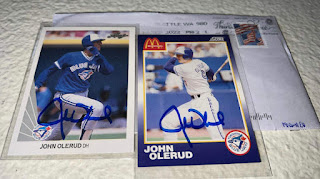 The former first baseman signed my cards in about a couple of months, including a 1990 Leaf RC and a 1990 Score McDonald's - it's fun to get back cards for sets where I'm trying to get as many signed [1990 Leaf] or potential TTM fuel found in the wild [such as the seemingly harder to get McDonald's oddball].

This post marks my first since a month long hiatus due to being out of the country on vacation - not feeling emotionally invested in throwing out scheduled, automated posts, I wanted to create a gap, where something was clearly up with the lack of posting activity [regardless of whomever really reads what I might write on a regular basis].

That McDonald's card is pretty sweet. Never seen that set before.

Welcome back! Hopefully you had a nice vacation :)