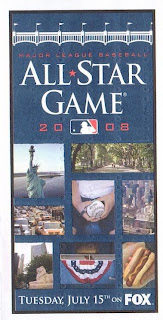 2008 All-Star Game - it is the fans who select the starting lineup and every year, there is a tendency to assume we the people will vote on who they we to see as opposed as who is sometimes more deserving.

On the other hand, Major League Baseball gives fans so little these days - we need something like being able to vote for the all-star game starters to make us think we are more than just paying customers.

At second base, I've flip flopped - Chase Utley was having a heck of a year, but he has slumped recently. I think I'd rather see Dan Uggla start for the National League, since he's more of an 'underdog' guy playing for a surprise team in the National League East.

Junior Griffey at times has been a guy who would rather spend time with family and basically do something else than attend an all-star game as a player - yet I think he should start this year, even he pulls out, just because he's done so much.

If I was picking a starting pitcher in the NL, the nod has to go to Tim Lincecum [San Francisco Giants]- I don't get to watch him often, but I've heard all about him. While some of the other National League starting pitchers [Edinson Volquez, Brandon Webb and Carlos Zambrano] are great, Lincecum represents the future realized with an 8-1 record and a 2.21 ERA, for a mediocre Giants team. In 97 innings, he has struck out 95 and walked 38 and I'd rather see him on the mound as a young up-and-coming stud.
For the American League, I want these guys to start - Catcher - A.J. Pierzynski [even though he is an ass otherwise], First base - Justin Morneau [Minnesota Twins], Second base - Placido Polanco [Detroit Tigers], Shortstop - Derek Jeter [New York Yankees], Outfield - Josh Hamilton [Texas Rangers], Milton Bradley[Texas Rangers] and Manny Ramirez [Boston Red Sox]. As my designated hitter, I've chosen Hideki Matsui [New York Yankees].

At first base - I think Morneau has been having a solid season, though Jason Giambi [who is having a renaissance season of sorts] will probably get the nod, especially with the game in New York.

There is no way Bradley is going to start the game - but he's gone through a lot in his career and while he doesn't get the same sympathy for his own troubles as Hamilton does [for his troubles], Bradley has been killing the ball as well as anyone in the American League.

If I was picking a starting pitcher in the AL, the nod has to go to Cliff Lee [San Cleveland Indians]- I would have given the nod to Joe Saunders [Los Angeles Angels], since Saunders is from my local Major League team. On the other hand Lee has been a little better in the first half, coming back from an ineffective season in 2007. In 88 innings pitched so far, the Indians' lefthander has struck out 76 and walked only 14, giving the Tribe someone to lean on when C.C. Sabathia wasn't doing so well.
Posted by Laurens at 11:03 PM
Labels: All-Star, American League, deserving, Midsummer Classic, National League, starters, Tim Lincecum, Yankee Stadium