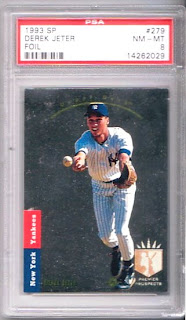 Though he is capable of turning his season around at any time - Mr. November is probably having his worst season in years [.345 on-base percentage/.394 slugging] so far.

Jeter isn't everyone's favorite player, but the concept of picking up singles [i.e. rookie cards] for my personal collection intrigues me - instead of doing a number of other things like:

1.) Picking up a box of a random 2008 baseball box - that isn't going to land in my mailbox for free, anytime soon. I think most boxes are put together, where the guy pulling the case hit is the only one who is going to be happy.
2.) I could go for two hobby boxes of varying quality - they are out there, but what would the assortment of cards lead to?
3.) I could pick up assorted packs - but all that is all about is having a cheap, wax orgy of cards headed for eventual storage.
4.) Picking up a $275 box of 1993 Upper Deck SP is just not an option - I'd rather get the key card from the product in an acceptable condition, instead of hoping to pull out from a box.
Posted by Laurens at 1:08 AM
Labels: 1993 Upper Deck SP, Derek Jeter, New York Yankees, PSA graded, rookie card