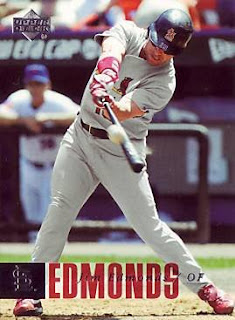 Featured player: Jim Edmonds
2006 Upper Deck #425 - After being cut by the San Diego Padres and eventually given a chance in Chicago, Jim Edmonds' bat has come alive a little bit.

These days, he is probably playing on borrowed time - but in 27 games with the Cubs so far, he has hit five home runs and driven in 19 runs in 80 at-bats. He has a slugging percentage of .588 and an on-base percentage of .352

He has has also made one vintage Edmonds catch in the outfield - against the Houston Astros.

It still remains to be seen how much he has left - earlier in the season, he looked pretty much cooked in his brief time with the Padres. Will his next injury be his last? Is his recent performance a mirage or an indication Edmonds is just getting warmed up? Hopefully he still has some staying power, so he finishes his playing career strong, when he decides to eventually hang them up.