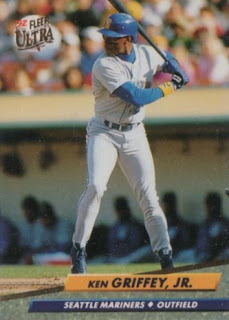 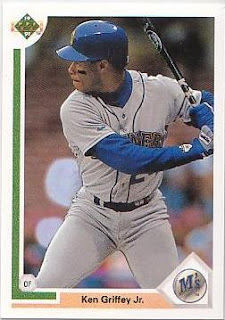 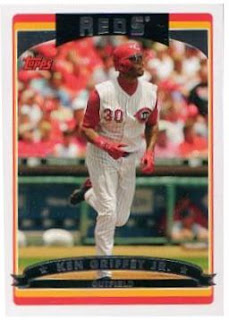 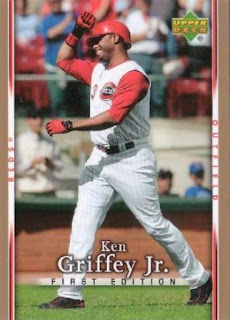 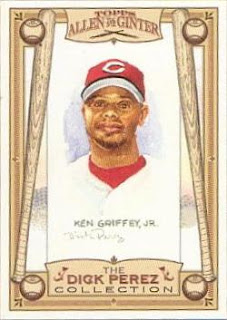 Congratulations for hitting your 600th home run
Featured player: Ken Griffey Jr. - I got on the Ken Griffey Jr. bandwagon when I found out his 1989 Donruss rookie card [obviously not pictured] was worth around $8 [of course in 2008, they are still worth about $8 slabbed in a PSA '9' holder today].

I think it was in a stack of scrap cards my cousin had and I had to have it - it was probably the greatest thing that a baseball card that I had in-hand could be worth some money. This was probably after handling all those worthless commons found in random packs, starter collecting sets, et al through the late 1980s.

It was probably handled a few times, so it wasn't in great condition. It also wasn't the 1989 Upper Deck, but I think it was the first time I'd objectified Junior Griffey as someone to collect otherwise - I also remember going to a card shop [maybe the same day, but who knows] and getting a 1989 Donruss rack pack. I ended up pulling a 'pack fresh' version of the card I got from my cousin and probably look back upon the pull as why this collecting thing was so great for me.

Also, I think it was my sister had bought a poster [again, not pictured] of Junior Griffey from a bookfair type deal and it hung on my wall for a while through the late 1990s - I think I still have the poster somewhere, showing Junior Griffey swinging the ball.

Around 600 home runs and 20 years later, Junior is a shadow of what he once was, and what he never could be again - yet he still has the majestic swing and maybe for mere moments at a time, the ability to capture our imaginations as baseball fans.