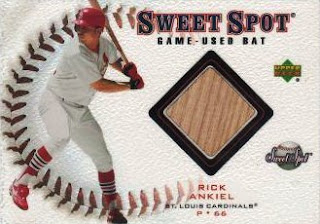 Featured player: Rick Ankiel
2001 Upper Deck Sweet Spot bat card - it goes without saying that nothing Ankiel will do as an outfielder will surpass what he was capable of doing as a stud pitching prospect coming up in the minor leagues a decade ago.

Hopefully the HGH concerns are in the past - far from being a curiosity, but still a project, Ankiel the position player has held his own. Despite seemingly being overmatched at times [57 strikeouts in 257 at-bats], he is providing some pop in the middle of the St. Louis Cardinals' lineup [.504 slugging percentage].

In a 8-7 Cardinals loss to the Detroit Tigers on Wednesday - Ankiel went 2-for-3, hitting two home runs, driving in three and scoring three runs.