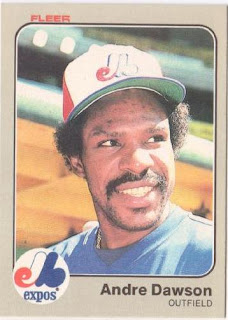 I found this card in a nickel box at a place where I get random cards - unlike many other Dawson baseball cards, where he is grimacing and/or is seemingly in a serious mood, he is actually looking at someone and smiling. Dawson is in the prime of his career and while playing on Astroturf will have consquences for his later health, Dawson is just beaming.

Is this a nickel card of a player soon to be enshrined in the National Baseball Hall of Fame [?] - who knows really, but Dawson put together a impressive resume that showcased his ability to hit for power and for speed. 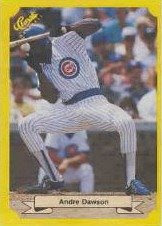 Dawson's 1987 Classic Yellow card #124 probably captures his worst moment as he hits the ground - Classic, which produced trading cards revolving around a baseball themed board game, used the same image as a 7/20/87 issue of Sports Illustrated titled, 'Beanbrawls' with Dawson on the cover. 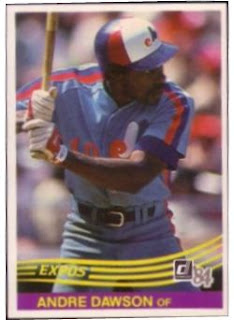 Dawson's 1984 Donruss card #97 - is a favorite because the focus is squarely right on Dawson. His eyes are focused on the incoming pitch and it looks like he is ready to hit one square up the middle.

I like the Fleer card. What are your thoughts on his Hall of Fame chances?

His on-base percentage was pretty low [.323], but then he wasn't an all-or-nothing guy.

He is a Hall of Famer in my book, but realistically a 'borderline candidate' for those who actually get to vote.