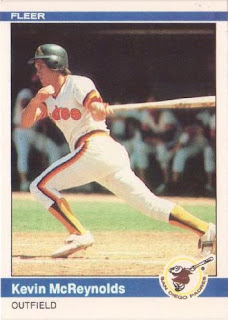 1984 Fleer Kevin McReynolds #307 - when I started following baseball through baseball cards in the early 1990s, McReynolds always struck me as a very pedestrian, mediocre player. He was winding down his career and there was nothing impressive about his numbers. I guess he was supposed to be a 'future star' with the San Diego Padres [an outfield of McReynolds, Carmelo Martinez and a young batting star named Tony Gwynn was going to be the Padres' outfield for years to come] but a player who blossomed for several years in New York instead. 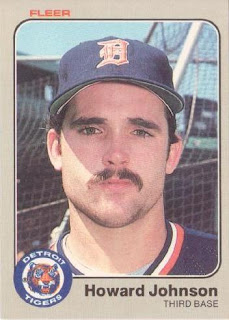 1983 Fleer Howard Johnson #332 - I have memories of owning this card for about two or three weeks, dating back to my very formative years of collecting 20 years ago. The memory isn't something to revisit and however ironic, I'll quote great Mark McGwire and say, "I'm not here to talk about the past." Johnson was one of those 'late bloomers' who was a platoon player early in his career, but he became a slugging star for the New York Mets through the late 1980s. This was probably his key card at one time and it took a year or two more before Donruss and Topps printed up their first HoJo cards. 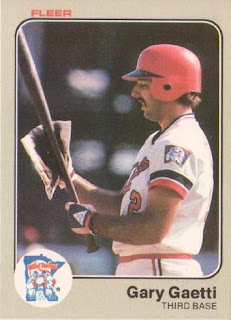 1983 Fleer Gary Gaetti #613 - he was star third baseman for the Minnesota Twins during the mid 1990s and California Angels' veteran free agent signing 'bust' in the early 1990s. Somehow he found the juice to re-energize his lagging career after leaving the Halos. He is in the Minnesota Twins Hall of Fame.

1984 Fleer, what a great set! Cool to see two former Mets on their previous teams.