K-Rod is a goner 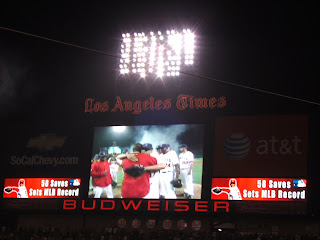 Angels fans knew how this was going to turn out and instead of being a pariah in Anaheim the [animosity over a signing long-term deal, mound/celebration antics, 'nervous save' moments] - Francisco Rodriguez can have a fresh start in New York [providing his arm doesn't pop off].

He was pushed out the door, but as I thank him for his service in Angels' organization for 10 years - it is time to move on.

You figure he has done all he can - helped the Angels to a 2002 World Series Championship and set the bar with his single-season saves record.

While it falls a bit short of what he and his agent were probably looking to get - K-Rod got his money [about $37 million] and also three years to close for a New York Mets team that was desperate for a star reliever / closer type.

I'm sure there are Angels' fans rejoicing the moment K-Rod inked his deal with the Mets - but there is always a caveat. I have trust in the Angels' organization to replace him but the time is now for either Jose Arredondo or Scot Shields.
Posted by Laurens at 10:10 PM
Labels: Anaheim Angels, closer, Francisco Rodriguez, K-Rod, Los Angeles Angels, New York Mets, saves

I'm not going to miss K-Rod. His fist pumping sky pointing knee falling was a bit much.

When Jason Kendall ran home from third and won the game when the catcher tossed the ball back to the mound, and K-Rod swiped at it with a bad attitude and missed it. The ball fell to the ground, Kendall broke for home and the A's won.

That was probably one of the moments where Angels' fans started to turn on K-Rod.

It was embarassing for sure and it reeked of K-Rod's arrogance.