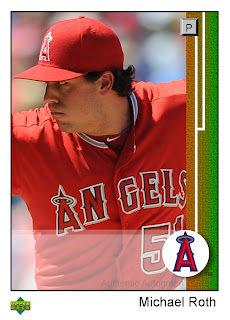 Michael Roth was a do-everything pitcher in college and was a 9th round pick by the Angels in 2012 - it still maybe the case where his pro career might not last relatively long, but he's already reached the Major Leagues this past season and who knows what can happen when a guy is just 23.

To create the card, I downloaded a 1989 Upper Deck template posted on Sportscollectors.net, where all I needed to do was play with the image, name, team logo and position in a photo editor like Photoshop - I'm not so proficient with photo editors and all I have is GIMP, so I thought it was still kind of hard to figure out how to drop a photo in, how to add my own text and find a suitable logo until I started playing with things to conjure up this custom card of Roth.

That is awesome. Any chance you can post a link to the template?

Great job. Looks awesome. Any shot you could share the template?