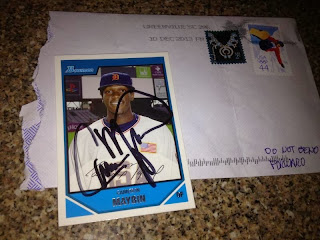 For the past several years, my TTM activity has really been non-existent - once in a blue moon, I can look forward to getting a SASE from a request I'd written off at least several years ago, though I don't really wait around the clock for the mail anymore like I did in the late 1990's through late 2000's.

With this request, I think sent a couple of cards, one of which was Maybin's 2005 Bowman AFLAC card - worth maybe a quarter, but a card I didn't want to lose when I thought a base card of a young prospect maybe worth something when it came from an 'oddball' set that one had to mail a redemption card for.

I got back a 2007 Bowman Draft card signed in black Sharpie - Maybin earned himself a 5-year contract with the San Diego Padres in 2012, but after a lost season this past year, he is looking for a bounce back season.