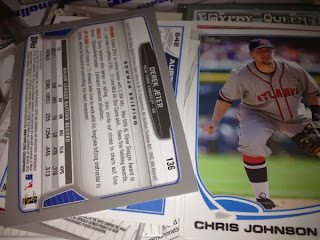 I have to figure out where cards have to go sooner than never - I'm trying to eliminate situations where things are not in order and I end up feeling like I'm missing cards.

As the baseball off-season rolls on, I should be worried about MLB / MiLB related transactions, but in-between moving my nickel and dime cards to 'new homes' as players move on - I'm focused on trying to deal with some of my collecting topics cards.

I feel like I need to go over my collecting topics cards for the longest time since I might be missing something - which makes me feel uneasy because I'm supposed be on top of at least the cards I collect for fun. THIS SOME SERIOUS BUSINESS HERE. 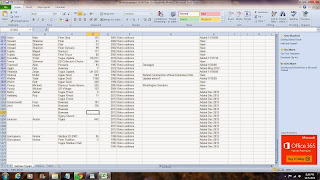 Right now, I'm listing all my additions from this year as 'achievements,' though there is still a little bit of time to add some assorted cards - I'm physically putting the actual cards into collection stored in boxes and fixing any discrepancies between what I may have and what is actually listed on a file in Excel.

1.) For any particular cards missing or otherwise loose somewhere in the wild, I tried to highlight the listing in red meaning so I have some peace of mind to say - 'OK, I do not have this card among this group of collecting topics cards, but I should be able to account for where it is.'

I WANT TO MAKE ANYTHING HIGHLIGHTED IN RED 'DISAPPEAR' SOONER THAN LATER - so it's best to delete the listing of the card just so I don't have to worry about it.

3.) At times I've listed the same cards twice, so if I have dupes, I just note it in one listing and delete the other, especially if it's a card I've had in my collection prior to the current year - don't want to duplicate the general number of cards I ended up counting out through my database as far as my current year achievements are concerned.

4.) Collecting topics I officially collect - many of these consist of cards I've seen on other blogs throughout the past five years, though I think back to the Pinnacle and Triple Play subset cards from the 1990's as my primary inspiration [at least in name] as well as the advent of better baseball card photography and premium quality card sets [maybe starting with 1989 Upper Deck].