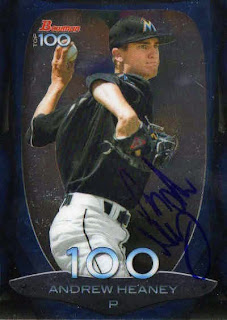 A Miami Marlin just a few days ago, Heaney was traded to the Los Angeles Dodgers and then flipped to the Angels for long time second baseman Howie Kendrick - as an Angels fan, I look forward to watch Heaney earn a spot on the starting rotation in 2015 and start to do his business.

I don't know much about him except he's lefthanded and I've already gotten his autograph a few times during the 2013 Arizona Fall League - from the bits and pieces I would guess Heaney gets results as more of a polished pitcher who throws 90-91 MPH as opposed to overpowering opposing hitters with pure stuff.

The kid seems to be is a legit prospect - though he's not another Chris Sale.