Hunting for some star on star cameos 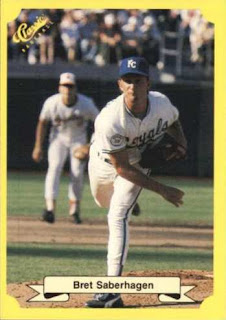 1987 Classic Bret Saberhagen #116 - a quick glance at this card shows Cal Ripken Jr. playing behind the one-time Kansas City Royals' ace of the 1980s and I figure the image used was from the 1987 All-Star game in Oakland.

I was going to put this card in my 'bonus babies,' though Saberhagen was a star in his own right - so this is an add to my star on star cameos collection. 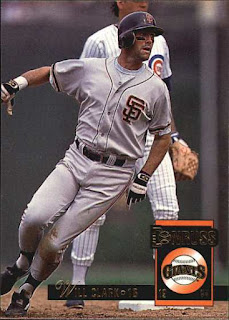 1994 Donruss Will Clark #33 - looks like 'Will the Thrill' scurries past second base with Hall of Famer Ryne Sandberg right by the bag. 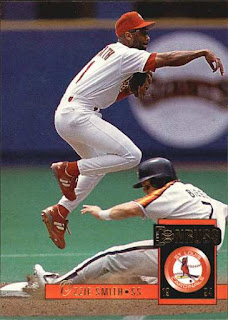 1994 Donruss Ozzie Smith #35 - I like this card because it features two eventual Hall of Famers, though in the early 1990s, I probably thought of Biggio as just another player who was moved from catcher to second base to prolong his athleticism and longevity.
Posted by Laurens at 4:01 PM
Labels: 1987 Classic, 1994 Donruss, Bret Saberhagen, Cal Ripken Jr., Collecting topics, Craig Biggio, Ozzie Smith, random, Ryne Sandberg, star on star cameos, Will Clark

That Ozzie is a-l-m-o-s-t a perfect card. The size of the team logo kills it a bit and blocks too much of the photo.

Nice. Man you really have to pay attention when thumbing through cards to find those!