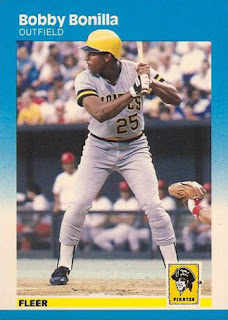 I might be dialing things back to ancient history, but I grabbed this card because it reminded me of a trading card magazine that touted Bonilla as the better card ‘investment’ over his Pittsburgh Pirates teammate, Barry Bonds - I want to say Sports Card Trader was the publication, which probably no one in the 21st century remembers, though I occasionally read it as a young collector in the early 1990s.

Bonilla had a productive career, though he’s mostly immortalized for Bobby Bonilla Day - my mother is the accountant in the family, but maybe how the deal works is if even if you end up paying a guy more over time, maybe the yearly amount almost ends up being spare change found in cushions [considering what the New York Mets were supposed to be making], rather than one lump sum being paid out.

I think it might be neat to build up micro-mini collection of these one-time stars and treat the cards like they were still hot commodities - putting them in top loaders and/or semi-rigids and hoarding them as snapshots of a re-imagined collect past for me.

I remember stockpiling Bonilla rookie cards. Good times. He actually had a pretty solid career, but it's easy to forget that when he's getting paid to be the best player in baseball.