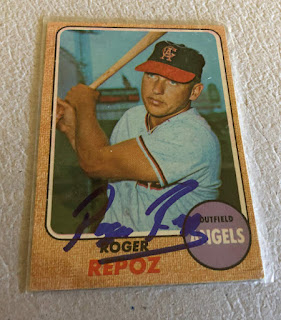 The former big league outfielder and one-time Angel signed my 1968 Topps issue in about a week - this card came from a box of loose cards featuring one-time Angels [either pictured as Angels or in another team's uniform] I still need autographs of.

Just to get the TTM machine going, where I may have some mail to look forward to - I dug out cards from the misfit Angels box, to put together and send out some recent requests.

Repoz was a serviceable player who was just a little above league average as a hitter [105 OPS+] despite a .224 batting average in 9 MLB seasons - though it wasn't in the major leagues, Repoz had a 5-year run as a slugger [122 home runs /.512 slugging] in Japan through the mid 1970s.