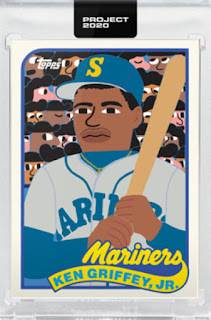 I got this card in the mail from Topps and despite its notoriety, it's going into my micro-mini Ken Griffey Jr. PC - Shore's cards were probably the oddest looking Project 2020 cards early on, like he purposely dumbed his cards down to appeal to third graders, but market conditions have made his cards [Don Mattingly and Mark McGwire for example] valuable just the same.

After the boom, now everyone was going to pounce on any future Shore release and the hype was huge as Junior happened to be the next Shore card - because of FOMO I bought one just the same, but I knew there was going to be 70,000 of these cards made instead of the sub 10,000 numbers his early cards did.

Just to show I’m either not looney or maybe just not smart enough at the time, I didn’t get the other card - a Joshua Vides Nolan Ryan because while any of these Project 2020 cards might have been cash money cards, I’m only focused on the Mike Trouts [regardless of print run or future value] and a card or two that catch my eye.

After the Shore Griffey Jr. release, the values crashed and no one is going to be bragging about making a mint off any one particular card - I lost about $13 on the Griffey Jr. since I paid the full price [$21.44 including tax] on Topps.com for a single card.

Maybe the Vides Ryan, paired with the Griffey Jr. wasn't a serious consideration for me but I can pick one up for $10 as well.