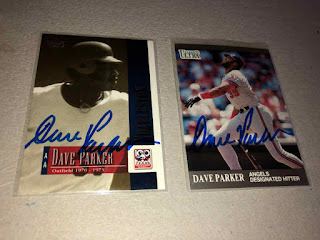 Parker signed my two cards in blue Sharpie in about a couple of weeks - one was a 2001 Upper Deck Minor League Centennial set card that I might have started in the mid 2000s and may still be working on in perpetuity, while the other is an Angels card that I chose to send because it was going to my all-time Angels autograph collection.

I saw there were Parker successes and I jotted out a letter to ‘The Cobra’ and put together a request along with $20 - he might have hooked up with an autograph middleman for a while, so in addition to a 'promoter tax,' you couldn’t just send to him outright.

Huge fan of Parker back in the day. Earlier this year, I got a really good deal on an autographed rookie card slabbed by PSA. I was very happy to add it to my collection. I think if I sent a TTM request, I'd ask him to sign his 76T or 82D Diamond King. Love both of those cards.