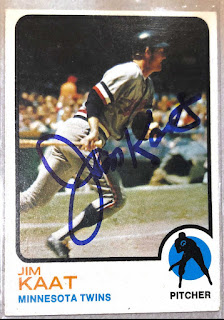 The former MLB pitcher who made his debut in 1959 and pitched through the early 1980s signed a pair of cards blue Sharpie for a $10 donation - I went on a two week vacation to Venice and Milan in February [just before the COVID-19 pandemic rocked those places hard] and this was a successful request waiting for me when I got back home.

I got Kaat's autograph in-person 25 years ago when during the pre-Internet days, I might get a glimpse a guy on TV and bring his card to my local big league ballpark in case he might show up with a particular team [Kaat was a broadcaster with the visting New York Yankees] - I don't think I ever saw him again, but must have gotten another autograph [through the mail] in the early 2000s.

I'd gotten Kaat's 1973 Topps card from COMC [?] because few vintage pitchers hitting cards exist otherwise - I don't think 'image dominant' mini-collection cards particularly need an autograph, but I thought I might as well send my card to the 81-year old, who presumably is still able to sign in the here and now.

Good timing on that vacation. I lucked out and got a chance to visit my dad in Vegas and best friend in Portland back in February too. Congratulations on the TTM return. Kaat doesn't have a lot of autographs (at least certified pack pulled ones) floating around out there.