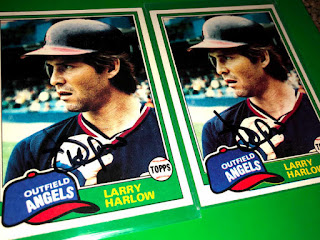 The former big league outfielder from the 1970s and 1980s signed my two cards in black Sharpie - like my recent featured autographs, this was a TTM request I sent early in the year and got back as part of the mail that piled up when I wasn't home for 5 months.

Admittedly, just like about all the rank-and-file players in team history Harlow wasn't a familiar name to me - but against the Baltimore Orioles [his old team], Harlow was a Angels postseason hero for a game back in the 1979 ALCS, when his game-winning base hit gave the Angels their first playoff win.