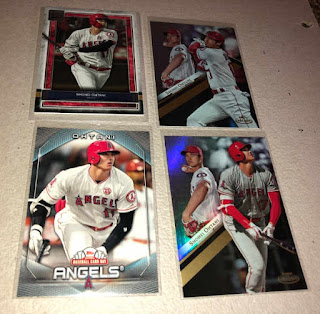 I want to normalize being able to go to card shows and inspired by some other bloggers, I was hoping to make a card show stop and end up with glut of cards that was both overwhelming and intriguing to eventually break down - I'd even set things up where I brought at least a 330-count box to store my goodies and some other bags in case there was an opportunities to buy up miscellaneous cards in quantity for cheap.

I was kind of ‘gung-ho’ about jumping into things, but maybe I needed a Snickers as I hadn’t eaten through the morning - it actually made me less patient, where I didn’t really want to nickel and dime myself picking out scrap cards at random tables.

At this card show, the tables start to get redundant after going meandering through the rows a few times without seeing an obvious spot to camp out at - this was the same show, where I discovered the seller with the 'vintage treasures’ guy, but it looked like he didn’t have as much stuff like last time, certainly nothing scattered and loose to rummage through. 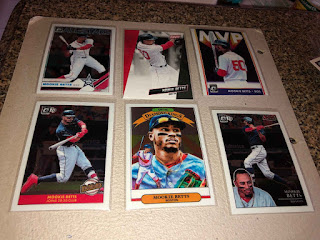 To lead off, I spent $5 for 22 cards at the table of a father and his teenage son - the boxes that had baseball were nice and neat, one box loosely organized by set, but sharing space with other sports and the other box, strictly baseball separated by with player labeled tabs / dividers; however, maybe it was only a couple of 3,200 count boxes hanging off to the side of the table.

I probably should have stuck here because I probably could have found 50 cards for $10, even if it was less 'quirky' and mostly basic star cards and strictly commons from the early 1990s - the goal was to find a table that was more comprehensive but that never quite came to fruition and what I was looking at may have been as good as it got.

I ended up with a quartet of Shohei Ohtani cards, that probably made me stick around the table - I found some Panini branded Mookie Betts cards from a few years ago, which has him listed as a Boston [Red Sox] player, but I'll relent to picking up any non-MLB licensed Panini stuff of superstars as misfit cards out of the 'cheapo' bins. 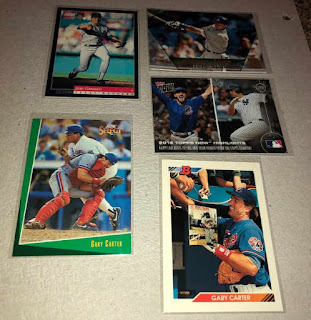 Gary Carter really starred through a time when baseball wasn't even a thing for me - but I acknowledge the Hall of Famer as a legend in his position and two late career keepers in my book is a 1993 Score Select #55 and a 1992 Bowman #385.

I like the Select because it captures him blocking the plate against an incoming baserunner [Mike Scioscia] - with the reputation for being a tough minded catcher who was involved in his fair share of collisions.

I like the Bowman because it shows him in a photo op moment, signing autographs - from what I've read and assumed, he was always a guy who was concerned about his image.

The 1995 Score Jose Canseco #4 is a fun card, showing on the mound - the write up on the back is more like a eulogy however, talking about how his career might have come to an end because he hurt his arm while trying to pitch and needed surgery.

2016 Topps Now Highlights & Happy Holidays promo features Kris Bryant, Gary Sanchez, Ichiro and David Ortiz - I was hoping it was a 'real' Topps Now card, but I assume these were mailed out as a bonus for people who bought Topps Now cards that year. 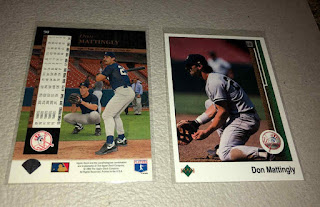 Don Mattingly may have symbolized 1980s baseball and a guy who I heard about when I was getting into collecting - even though he isn't a Hall of Famer, his cards will always be considered keepers in my book.

I've seen his 1989 Upper Deck #200 for the longest time and I wanted ownership of the card. - maybe it's just another base star card, but it came from a premium set that ushered in a new era of trading cards.

I was going through other loose Mattingly cards and found the 1994 Upper Deck #90 - the front shows a horizontal image of Mattingly diving to field a ball, which may be a unique enough action on its own merit.

However, the back really made the card a keeper, where the Yankees great is pictured as batting righty - maybe playing in a game of pepper with his teammates.

I'm the most casual fan of the NBA and I don't really bother collecting the cards, notably when 'here and now' unopened hard to find out in the wild - however I might be open to seeing if I can grab a few loose cards of notable players when I can, probably to add some diversity to some mini-collections topics as needed. 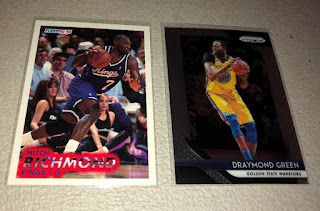 I don't know why I picked up the Richmond card - he was a pretty good player, but not a 'here and now' guy.
Posted by Laurens at 4:40 PM
Labels: card show trip, disappointment, MLB, NBA, random

Laurens.. go check out the Kevin Seitzer card from 1993 Select. That one is definitely a keeper. What card show did you go to? Too many shows every week in OC now.