It wasn't surprising, but there was a sense of finality 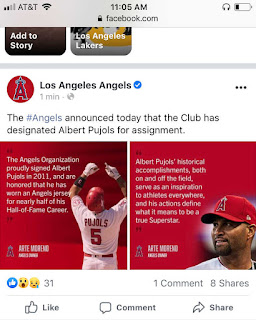 From a guy I dreamed on posting big numbers after the signed with the Angels to this moment - I had to do double take when I saw that Angels Facebook post where all time great Albert Pujols was being designated for assignment.

Reading bits and pieces, he might still be with the team but perhaps being unhappy about his playing time sealed his fate - in what was supposed to be his last year [as a player] as part of the mega contract he inked up during the 2011 offseason.

Through games this season, there was talk about how much healthier Pujols was and how much harder he was hitting the ball according to all that exit velocity data - I told myself, guy is hitting .195 and while batting average maybe outdated, go wake me up when he's hitting .250.

At this point, my sentimentally towards Pujols is a little muted - I won't ever question his intensity, work ethic or his intentions, but he's the No. 1 example where getting old and modern day shifts really accelerate the deterioriation of a superstar player's ability to perform on a year-to-year basis past a certain point.

Whether or not Pujols plays another game in the Bigs again... I will always look at his career as two parts: His time with the Cardinals and his time after the Cardinals. I was just looking at the numbers a few days ago and was blown away at the decline.