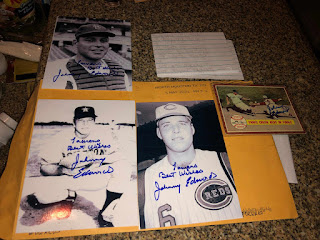 Off this card show trip, I found a 1962 Topps World Series subset card and while the players were not identified - I did some research and saw that it was Johnny Blanchard of the New York Yankees sliding in with Johnny Edwards of the Cincinnati Reds catching for a little play at the plate action.

Of the two players, Edwards was still living and I thought to take a chance and send him the card to be signed - it took about a week for Edwards to respond with my card signed.

He also added three smaller photo prints and returned my letter with a couple of responses to what I'd written him - when I can do it and have success, I like when I am able to send to old school players on their vintage cards.