I stumbled upon this blog post started by The Diamond King - maybe the idea of having a favorite player has been done before but to narrow it to one player per letter is a challenge that gets my mind working and maybe more importantly, participating in a 'community' exercise.

I didn't want to spend too much time going over my choices because they should be spontaneous no brainers - but to cheat a little, I'll mention at least one other player considered and in some cases, probably interchangeable with the ones featured.

In some cases, I may have players in mind I'm not going to bother mentioning - though I do considered them favorites regardless and have prominent spots as far my memory banks go.

As a little wrinkle, I'm going from Z-A 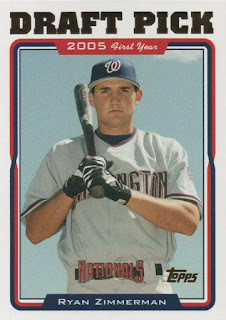 Z - Ryan Zimmerman - it was either the longtime Washington Nationals star or Barry Zito, who became the next big thing in Oakland as part of the Big 3 in the early 2000s. 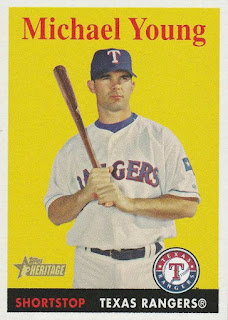 Y - Michael Young - I saw him as a self-made ballplayer who might have profiled to be a more of a utility guy, but emerged as a hard hitting infielder who strung up some metronomic offensive numbers. 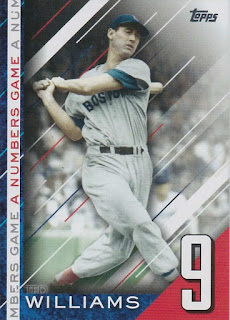 W - Ted Williams - there are some legendary icons in the game I had to learn about as a fan and as a card collector, regardless of when they actually played. 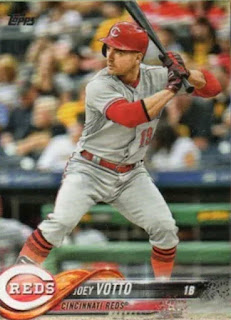 V - Joey Votto - despite being on a late career swoon, I see him as having comparable numbers to Hall of Famer Edgar Martinez, except Votto spent his career in the National League where he had to play the field instead of primarily being a DH, even through his mid 30s. 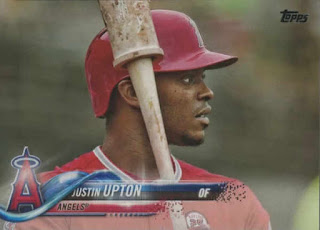 U - Justin Upton - he's put together a solid career, though he's playing through his decline years as an Angel. 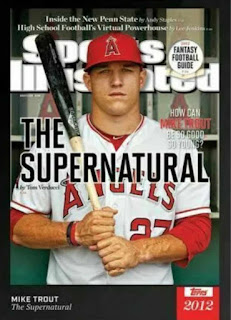 T - Mike Trout - the gold standard of big league ballplayers, he's probably an Angel for life, but are the injuries starting to pile up and will he ever star for a Halos team that gets into the playoffs?

If Trout didn't turn out to be the player he is, on my home team - I would have probably gone with Frank Thomas, because The Big Hurt was a prominent superstar when I was really immersing myself in collecting baseball cards in the early 1990s. 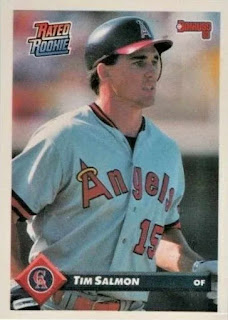 S - Tim Salmon - it's been 15 years since he was last a player, but there is still nostalgia for Angels legend.

I'll go with my home team guy, but Ichiro is probably interchangeable as far as 'S' goes - though if he is known as just 'Ichiro,' shouldn't he count for 'I' as well, rather than 'Ichiro Suzuki?' 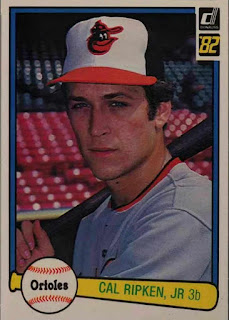 R - Cal Ripken Jr. - Alex Rodriguez would have likely been the pick but Ripken Jr. had icon status through the time he broke the all-time consecutive games played record and no one was a bigger deal in the mid 1990s era than he was.

Nolan Ryan and Babe Ruth were also considered - Ryan actually had his prime years with the Angels, though I knew him mostly as a longtime Houston Astros player and a Texas Rangers icon. 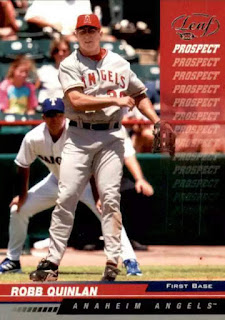 Q - Robb Quinlan - I had to dig hard for a 'Q' and may have gone Carlos Quentin, but I'll go with the home team guy who managed to stick in the big leagues for 8 seasons.

I like the idea Quinlan looked like an ordinary guy who seemed like he was plucked off the street and was asked to suit up - he was mostly a fill-in player who put modest hitting numbers, but had some decent contact skills with the ability to put the bat to the ball. 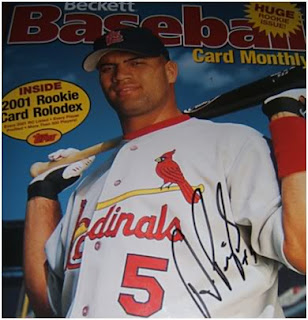 P - Albert Pujols - regardless of decade of decline and his release in the final year of his contract as Angel, you can't ever take away his accomplishments at his peak or erase the numbers he has put up in his storied playing career. 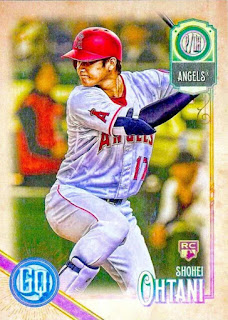 O - Shohei Ohtani - I'm wondering what combination of pitching and hitting numbers is going to get him to the Hall of Fame one day, even if it's unrealistic to see him actually get there.

I hope there isn't something a major injury that derails his ascenscion to whatever numbers he is going to end up with - either as a pitcher, DH or even as a position player. 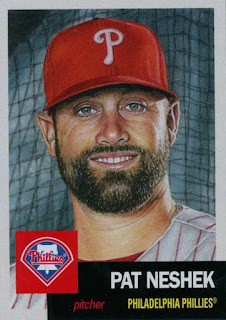 N - Pat Neshek - the former big league reliever has been a friend of the collector ever since he was in the minor leagues and while his MLB playing career has given him opportunities to more than just another guy, he has always kept things real as a card collector or autograph collector himself. 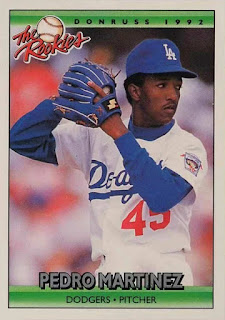 M - Pedro Martinez - if nothing else, his confidence and fire made him an alluring, if infuriating pitcher to watch work [if you weren't a Pedro fan or a fan of the teams he pitched for], where he had a reputation as a head hunter. 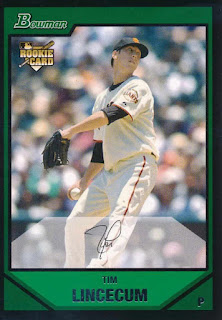 L - Tim Lincecum - a decade ago, maybe he was on top of the world, but things can come down so fast.

Maybe the wear and tear took it's toll on his delivery and his arm - he couldn't finish out the second half of his big league career on his terms. 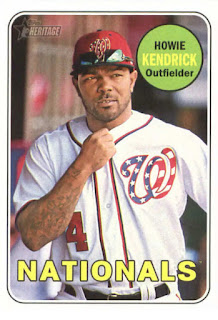 K - Howie Kendrick - despite doing it with another team, it was fun for me to see his personality come out late in his career where he had some clutch hits during the postseason to help the Washington Nationals win the 2019 World Series. 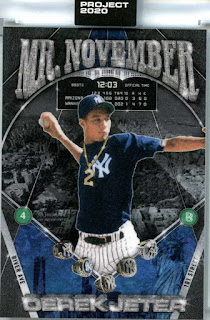 J - Derek Jeter - he's on this list because he was a national player to follow, where he wasn't just some randomly good MLB player, but a Core Four guy who starred for a New York Yankees dynasty through the early 2000s.

If not Jeter, a pick here with would Randy Johnson - he wasn't too friendly, but once he figured it out, he was the most intimidating pitcher over the past 30 years based on his reputation alone. 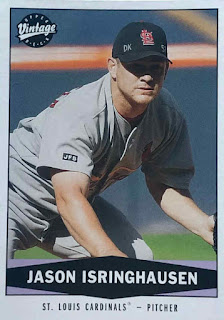 I - Jason Isringhausen - maybe a case where I'm digging for a player whose last name starts with an 'I,' but Isringhausen was a guy who may have been ill-fitted to be the top flight starter, but was able to rejigger his career, where he emerged as a weapon out of the bullpen.

He spent his last big league season with the Angels - I don't even know why that happened, but it did. 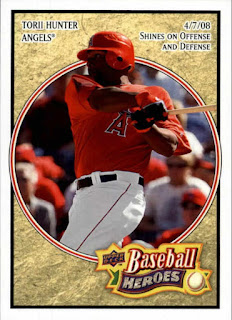 H - Torii Hunter - maybe Rickey Henderson would be my choice otherwise and Todd Helton would be in the discussion, but I'm good with Hunter as my A-Z player challenge favorite for the letter 'H.' 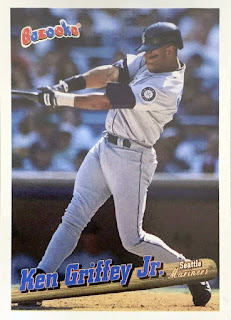 G - Ken Griffey Jr. - the second half of his dominant, majestic big league career was derailed by injuries, but The Kid stands tall as the iconic MLB player of the 1990s.

Vladimir Guerrero and Tony Gwynn are probably up there as 1A and/or 1B - would pick Guerrero because he was the one who starred for the Angels, but Junior may have started me that rookie card craze. 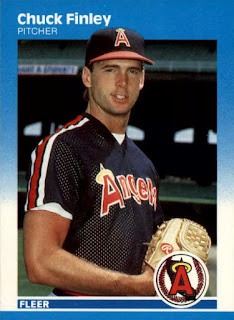 F - Chuck Finley - he was a solid lefthanded starting pitcher for the longest time, but may have been a little more low-key, so he was more than a little underrated.

In some of the junk wax era cards [around 1988] where Finley was pictured with facial hair - I always thought he looked a little like actor Anthony Edwards in Top Gun. 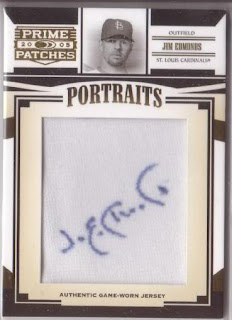 E - Jim Edmonds - I remember him as a first base / outfield type who could handle the bat, but hit for marginal power nearly 30 years ago.

He turned into a great, power hitting centerfielder who had his best years as a St. Louis Cardinal - Edmonds is a bit like Damon where they might be knuckleheads at heart but they were able to accomplish a bunch of things between the lines. 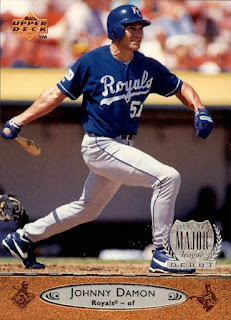 D - Johnny Damon - from his clean cut all-American days in Kansas City to his Boston Red Sox Idiots years, I thought he was a high energy, fun player to watch.

He seemed to be a down to earth personality and mostly a nice guy when I got his autograph in-person - even if he was mostly a meathead who was arrested for DUI in 2021, along with his wife who was getting in the way. 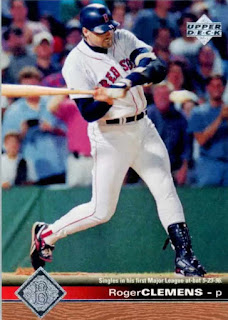 C - Roger Clemens - maybe Rod Carew was the initial, ideal choice, but Clemens was more of a contemporary favorite [even if we are talking about mostly the past 20-25 years rather than 'here and now']. 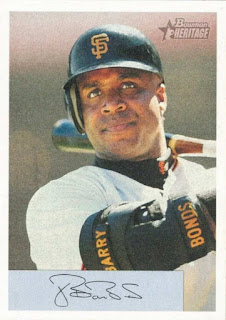 B - Barry Bonds - you can't tell the story of the all-time MLB home run leader without the substantial PED suspicions and generally boorish attitude, but he was just a force of nature in his late career peak. 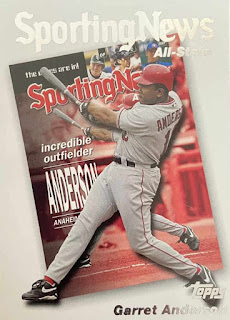 A - Garret Anderson - I've got to get the trio of Angels outfielders [Anderson, Jim Edmonds and Tim Salmon] whose stadium giveaway poster I put up on the wall nearly 30 years ago on this list.
Posted by Laurens at 10:00 PM
Labels: A-Z player challenge, favorite players

Great stuff! I love a lot of those players.