I was able to jump in on Greg's post giving away cards and found a large bubble mailer in my mail box this past week - I tend to refer to him as the card blogging 'sage,' but what hasn't been said about him?

If nothing else over the years, since he has been published in Beckett publications - he has evolved into an expert, an authority figure posting about baseball cards, the Dodgers, Ron Cey, 1975 Topps, old school, vintage, oddballs and the various life issues that may occasionally take priority over cardboard.

I might not always be interested in the things he has posted about, but if he has a new post up - it's probably worth taking a moment to check it out.

I couldn't wait to just to tear into the my package and find 9 team set bags stuffed with assorted cards - N.O. also threw in a 1992 Donruss pack [15 cards] that counted as part of the 253 total cards I ended up with. 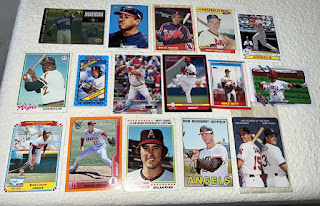 A good number of cards was Angels material, which is no surprise since obviously that is the team I collect - I like the minor league Garret Anderson, the 2002 Topps 206 Anderson, the oddball Rod Carew and the old school Don Baylor cards. 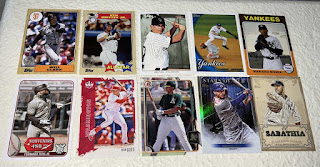 There was the occasional star power - I'm not sure if Matt Olson is on that same level as the other guys, but he has been a bonafied slugger through his big league career. 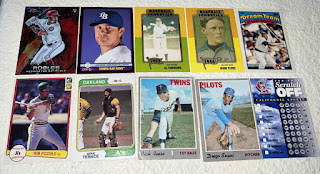 Some odds and ends to go through like parallels, oddballs, old school and vintage - the Topps Fire Victor Robles is a rookie-year shiny, though his potential has dimmed over the years. 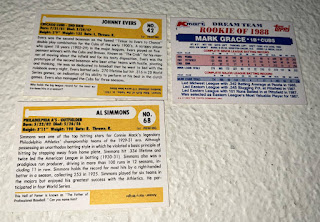 The 1980 TCMA Baseball Immortals cards aren't something that would normally pique my interest and I'm not a card back 'enthusiast' either - but I like how the backs look compared to a regular Topps card from that era, where there is a bit of color and the stock feels textured and creamy. 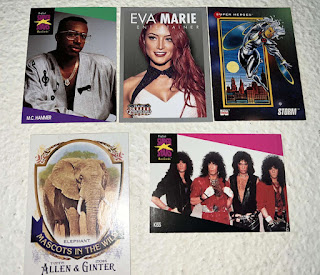 To be completely random, these were thrown into my stash - I remember sitting through a KISS concert about 6 years ago, maybe the only concert I've ever attended and in the middle, the crowd was basically made to recite the pledge of allegiance.
Posted by Laurens at 3:03 PM
Labels: Angels, freebies, Night Owl Cards, random

The Pledge of Allegiance at a Kiss concert? I don't think that would've happened in the '70s.

Glad I could send some cards your way at thanks for reading!

There's a really nice selection in that first photo, especially the Tim Salmon Mother's Cookies. I didn't know that he had ever appeared on an MC card.