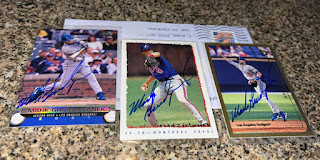 The former big league infielder signed my cards in about a month back in April - I don't really think Grudzielanek was a player I paid attention to regularly, where he was more rank-and-file than a star outright, but his seemingly unique last name kept him relatively familiar.

Grudzielanek could hit for average and collected over 2040 base hits in his big league career - looking at his Baseball Reference page, maybe his numbers come off as more modest [.289 batting / .332 on-base / .393 slugging / 90 OPS+].

However, it might be a fun thing for me to break things down and see where Grudzielanek had a run of good, serviceable big league seasons - especially when he seemed more like a grinder from day one, rather than a guy who came into big leagues with any sort of pedigree as a top prospect.

He got arrested for child abuse last year.