What I've noticed is that I don't have an idea what is going to catch my eye at one table - where there is a certain lack of focus when it comes going through rows and rows of cards.

This doesn't mean there isn't satisfaction in my keepers - but perhaps I wonder if my purchases mean anything after the fact or any of number of cards jumbled together end of being misfit toys in my collection?

I kind of feel like I'm in my own little world when it comes to standing at a table and seeing what cards may have enough eye appeal - so I feel like there is plan and I'm just seeing what may compel me to flag cards I entertain taking home. 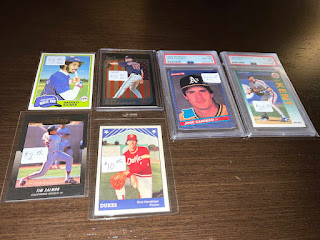 If nothing else, I like a more old school vibe, so I try to salvage loose cards that may not be the latest and greatest - but binder material that may add some diversity to the types of cards I may have in plastic pages.

Harold Baines gets unfairly panned as an undeserving Hall of Famer, but I wanted his 1981 Topps rookie card as a centerpiece to the loose cards I plan to display in a binder - it maybe a case where I actually still have to give him his proper due and make page for him.

I found a 1992 Donruss The Rookies Phenoms Tim Salmon insert card I'm sort of familiar with, but never really had in-hand - go figure it's been at least 30 years, but it's still fun finding the occasional prospect / rookie era cards for the Angels franchise Hall of Famer.

A rookie year parallel of Roy Halladay and another minor league card of Orel Hershiser are keepers as a little more different than the typical cards I'd end up with - while neither might be top tier guys in my book, they are decade stars, so I do collect them to a certain extent. 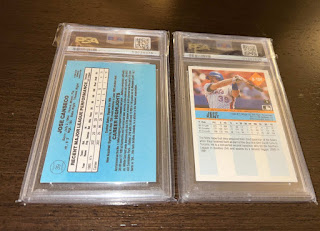 I'm indifferent to slabbed cards because it's $$$ impractical to send in cards myself, but generally prefer graded singles compared to raw cards when available - I already had a graded 1986 Donruss Jose Canseco rookie card in my collection, so I was only picking up a 1992 Fleer Update Jeff Kent rookie card, along with the loose cards.

I presented my cards to the seller without the Canseco and after getting a half off discount [for at least the loose cards] and $5 off the sticker price on the graded Kent rookie - I figured why not add the Canseco as well, where it was a totally junk wax era thing to covet that card at one point.

Even if the era is ancient history, there maybe something about coming back from a card show - knowing I brought back the rookie card of one of the brightest, controversial superstars of the times.

I don't know if a Jeff Kent rookie is particular unique, but I may have seen an ungraded copy in a random box and passed over it during a card show trip last year - it sort of became a scratch the itch card and I wanted to pick up one just because it's from a seemingly mythical junk wax era release.

Even if it's not really the case after the fact, I associate the Fleer Update set as being harder to find - a set I never got to see ever, though I was able to pick up a copy of the key rookie [Mike Piazza] years ago after Piazza retired but before the Hall of Fame called.

Kent has a Hall of Fame case but he wasn't the friendliest guy and is probably seen as strictly an accumulator who hit all these home runs as a second baseman - rather than be seen as generally this all-around talent who was a star from day one.

It's pretty hard for folks who are drawn to the discount boxes to go into a show with any sort of real plan. Personally, I like that method of card shopping better anyway. The randomness is what makes it fun.