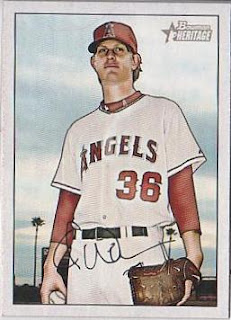 A game like the Los Angeles Angels' 1-0 loss against Los Angeles Dodgers is a colossal fail - when you allow your opponent no hits, shouldn't the lineup just help out a little?

Weaver and Arredondo combined to throw an unofficial no-hitter - but the only run scored in the game was on a sacrifice fly by the Dodgers' Blake DeWitt, scoring Matt Kemp from third base.

Kemp had gotten on-base on an apparent hit - that was later changed to an error on Weaver, who pitched six innings of no-hit ball. Arredondo then took over on the mound, who struck out three in two innings of no-hit relief. 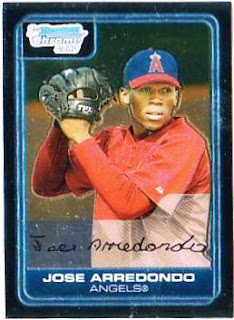 Arredondo is working on his apprenticeship - likely giving an Angels a legitimate option to set-up in 2009, in case Francisco Rodriguez leaves and Scot Shields slides into the closer's role. With Arredondo's stuff, he is probably going to close, sooner than later.

It is only one game - but on Friday, the Angels' bats made Chan Ho Park look like a dominant pitcher that he isn't. While Weaver wasn't sharp at times, he did throw no-hit ball and the Angels' bats obviously did not help him out.
Posted by Laurens at 1:50 AM
Labels: hitting slumps, Jered Weaver, Jose Arredondo, Los Angeles Angels, Los Angeles Dodgers, no-hitters

lots of game-used, autos, inserts, parallels, and subs for sale. still have about 500 to put on, and i'm just getting started.