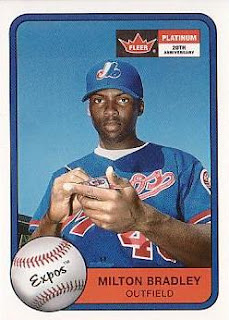 The scowl isn't going away anytime soon
Featured player: Milton Bradley
2001 Fleer Platinum #121 - Bradley is fighting in every single at-bat fighting in each at-bat and one of the constants in his Major League career is he's bound to go postal on any umpire whom Bradley feels is squeezing him behind home plate.

He's the living, breathing emotional outburst and while he's always been able to hit with some pop and get on-base to boot, he comes with a lot of baggage - he is sort of hard to figure out, hard to root for as a far and easier to pick apart. Most of the time he isn't going to get the benefit of the doubt from the fans, the umpires and maybe people in the game who thinks most of what he does is 'Bush league.'

Time will tell if Bradley can have his best season as a professional ballplayer - but in the shadow of the meteoric season Josh Hamilton is put together for the Texas Rangers, Bradley has been doing his part to at least keep the team close to .500.

I was a big fan of Bradley when he was on the A's and was super bummed when they let him go.