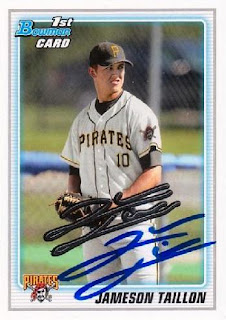 When it comes to through the mail requests, I try to send only one or two cards - sometimes the players who respond to my request may keep the cards I'd really like to get signed instead of the extras I may enclose to try and get an extra signed card or two.

It isn't the responsibility of athletes who receive something in the mail to be autographed - sometimes however, the more cards are sent, the more likely the athletes are going to rush through signing and putting the cards back into the SASE, where they aren't too keen on letting the ink dry on the cards they just signed.

Taillon was the No. 2 overall pick in 2010 for the Pittsburgh Pirates and the hard throwing righthander was ranked - No. 18 among MLB.com's Top 50 prospects for 2011.