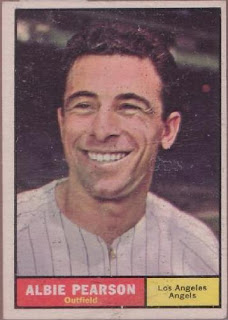 Like other casual collectors getting into collecting baseball cards for the first time, there was a misconception anything old was going to be valuable - but really anything old [say 1973 and before] is just old unless it was almost in pack-fresh condition [no using the cards in-between bike spokes] and these days, professionally graded.

Still, I picked this card up of Albie Pearson for $2 shipped because with the Angels' 50th Anniversary this upcoming year - there will be probably be an opportunity to see him in-person and get his autograph.

While an old friend had gotten him through the mail years ago - I believe he refuses mail sent to him these days.

The card is worn down, beaten up but has survived for at least 50 years - for rank-and-file vintage cards, there is some collecting value as a relic from decades past, even if it doesn't always picture a Hall of Famer like a Mickey Mantle, Willie Mays, Hank Aaron or Ted Williams.