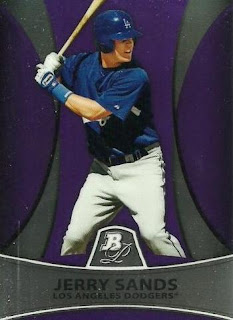 I think I feel a little buyer's remorse because I bought the card for a dollar but I had to pay another $2.50 for shipping / handling - late in 2010, I wasn't able to trade for a Bowman Chrome retail Green refractor and wanted some kind of refractor of the Los Angeles Dodgers' farmhand.

I just had to have the Platinum retail Purple refractor when I first saw it - even though I had the base version already.

From looking at Sands' minor league stats - he maybe the type of player who emerges from relative obscurity to contribute at the Major League level as a rookie star or be the next Billy Ashley FWIW.