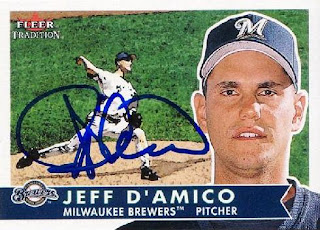 This autograph request took about two weeks or so - I don't remember D'Amico for any particular reason except he was supposed to be a top pitching prospect for the Milwaukee Brewers in the mid 1990s, but got hurt a lot so his Major League career didn't really take off as expected.

I do remember another Jeff D'Amico who pitched one season with the Kansas City Royals in 2000 - I was butchering the pronounciation of 'D'Amico' and Ricky Bottalico, who I think was signing for me before an Angels / Royals game was calling me out for not being able to say 'D'Amico' right.