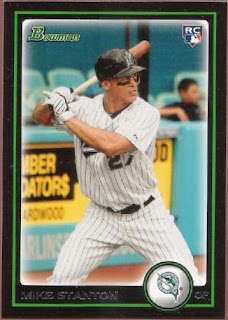 I picked up a hand-collated set [around $25 shipped] of 2010 Bowman Draft and while there are Mike Stanton, Stephen Strasburg, Jason Heyward and Buster Posey cards in the set - Topps has already rolled the presses on releasing various basic, non-autograph MLBPA rookie cards of these guys and the basic cards from the set are only worth a couple of bucks each. 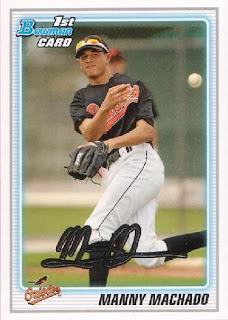 Maybe the most redeeming if not exactly noteworthy feature to the set - is Topps decided to include non-auto base cards of the guys who do have Bowman Draft Chrome autographs in the set, like Manny Machado of the Baltimore Orioles, Zach Lee of the Los Angeles Dodgers or Zack Cox of the St. Louis Cardinals.

A signed 2010 Bowman Draft card with a foil stamped fascimile signature is probably not going to look as good autographed in-person / through the mail - particularly when the facsimile is stamped across the card. 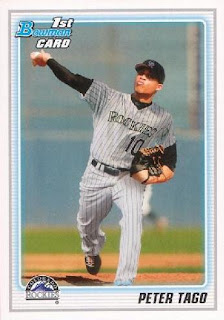 I realize Bowman Draft is a prospector's product where gripes about aesthetics aren't always valued as long as there is a good crop of signed Bowman Draft Chrome cards and corresponding parallels - however some of the Photoshop work is off in trying to show the draft picks wearing Major League uniforms, particularly the doctored 'in-action' shots of particular players in high school or college.

I've thought about buying sets this way. I guess I should do it for some of the ones like this where I don't know 80% of the guys. it's almost impossible to build a set ripping packs nowadays.