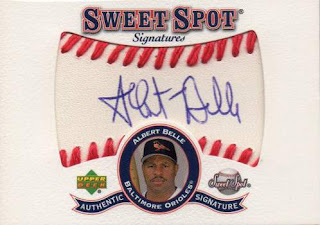 I like these certified autograph cards where presumably a baseball is ripped up and the sweet spot [the area between the seams, the preferred spot for single signed baseballs] - is put together to mimic a signed baseball on a trading card.

Pacific Trading Cards may have been the first card company to incorporate a swatch of a baseball into a card - but Upper Deck was the first company to popularize this type of autograph with their Sweet Spot product in 2001.

I picked this 2001 Upper Deck Sweet Spot Signatures card of one the most fearsome big league hitters to play in 1990s - when looking at completed auctions on eBay, maybe it's a little weird to see that Belle's autographs don't really go for much.

Maybe it's hard to call Belle a typical baseball 'fan favorite' when he seemed like a mean, angry SOB as a player - but he put up numbers, hit home runs a long way and didn't take any nonsense from anyone who dared challenge him.

Belle was robbed of the 1995 American League MVP because he didn't want to deal with the media at the time - though a hip injury cut his career short in his 30s, he might have garnered stronger Hall of Fame support if he had been a little friendlier to the press.