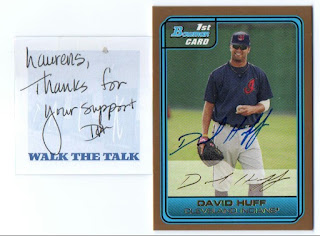 I had to dig this signed card up when I saw Huff was pitching for the Angels - with an 11.81 ERA in two starts [including 4 home runs allowed in 5.1 innings] however, it would surprise no one to see the journeyman lefty disappear off the Angels roster for good.

I probably sent a TTM request out to Huff 9-10 years ago when he still had some upside to his pro career as the 39th overall pick by the Cleveland Indians in 2006 - he has pitched in parts of 8 seasons at the big league level, with his biggest run of success [3-1 W-L, 1.85 ERA] coming with the New York Yankees in 2014.