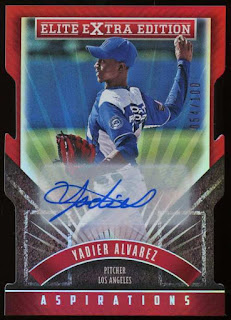 2015 Panini Elite Extra Edition Yadier Alvarez #/100 die-cut auto [$14.99 BIN plus $2.95 s/h] - I picked this certified autograph card up from eBay since the Los Angeles Dodgers pitching prospect is a flamethrower with ace potential, ranked No. 26 among Baseball America's Top 100 prospects and No. 43 among Major League Baseball's Top 100 prospects.

In a minor league game I saw this spring, he sent one guy’s bat flying over the visiting dugout on the third base side - that may not mean anything, but that’s kind of the stuff he has.

Once in a while I still want to impulsively grab first-year certified autograph cards of random prospects - frankly I'm just not going to get into the Bowman Chrome autos and corresponding parallels, but maybe a card from a lower-end prospect product catches my attention.

In 4 starts with Rancho Cucamonga Cucamonga Quakes, he's been battered around with an ERA of 6.43 - he hasn't shown much yet, but he's actually whittled his ERA down and once he figures things out in a hitter's league, who knows how well he'll end up doing.