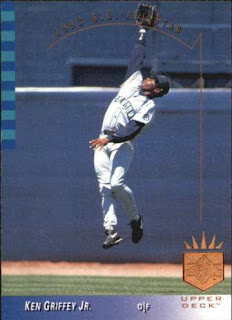 1993 Upper Deck SP Ken Griffey Jr. #4 - the card holds some allure because it seemed natural to associate Griffey Jr. with the baseball card company that had a part in introducing the phenom to the hobby in 1989.

Because Griffey Jr. was one of UD's marquee athletes, I assume the company took more time in selecting an image that would pop - I do wonder how this image of Griffey Jr. leaping up in the air, trying to make an over the shoulder catch came to be.

Because UD SP was such a high-end product, it wasn't like I was able to go into a Target or Toys "R" Us and pick up loose packs - I want to say I finally picked up the Griffey Jr. years after the card came out, though I'd have to check where it is.