"A card of a player who became manager of your favorite team." 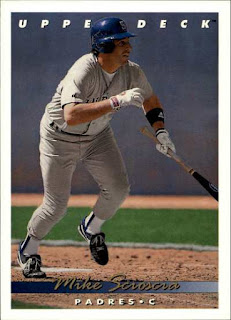 1993 Upper Deck Mike Scioscia #688 - this card is sort of unique because presumably the image used was from a spring training game, yet Scioscia didn't make the San Diego Padres' Opening Day roster in 1993.

As a player, the longtime manager of the Angels probably shouldn't have been pictured in anything but a Los Angeles Dodgers uniform - though I guess 'transactions happen' when an old big league veteran has to try and latch on somewhere else.

Cool card. Didn't even realize that Scioscia suited up with the Padres at any point... even Spring Training. We learn something new every day.