"A favorite card from a country other than the United States." 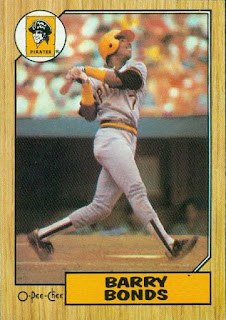 1987 O-Pee-Chee Barry Bonds #320 - I randomly bought two or three loose OPC packs at some mall show I stumbled upon when I was a kid and likely pulled the Bonds.

I don't think the card was worth anything more [maybe less] than the regular Topps card, since the OPC cards are sort of carbon copies of their Topps counterparts - looking at other Bonds cards from 1986/87, I've always liked the picture used by Topps, since it looks like an action shot where he might be following through on his swing.

Beautiful card! Love the photograph they chose for it.