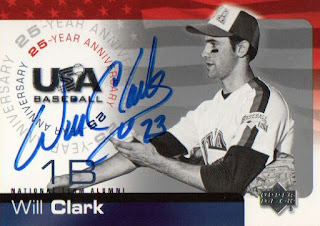 Clark signed my card in about a month c/o the San Francisco Giants - he might have been actually one of my first TTM attempts, though it was probably in the off-season after the Giants got to the World Series in 1989.

Since I just had no clue, I may have sent a superstar at the height of his popularity a request consisting of a couple of random cards with no self-addressed stamped envelope - needless to say, I don't really know what happened to that ancient attempt at a TTM.

Up through last year, I don't think I've actually ever gotten an autograph from Clark either in-person or TTM - but he's been pretty consistent about answering requests sent to him in recent years, so I finally got in the action.