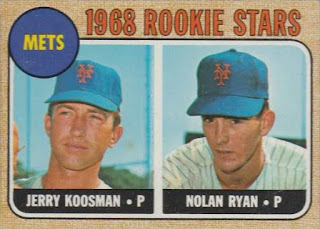 1967 Topps Nolan Ryan / Jerry Koosman #177 rookie card - I chose this card because it's the key mainstream card of a dominant strikeout pitcher who I felt peaked as a national superstar in the early 1990s. 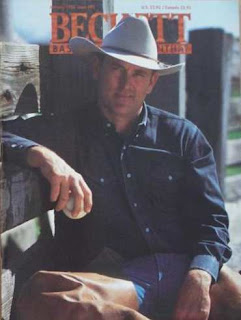 For a period of time in the early 1990s, Ryan was everywhere and I still remember him decked out in his ranching / cowboy gear - on the front cover of this Beckett Baseball Card Monthly magazine.

Ryan's rookie card was a real big deal among collectors, whether or not it was realistic to own - it gained some notoriety when it was it accidentally sold at a card shop for $12.

I thought pulling any of Ryan's cards were worth its weight gold and even though he was in his 40s and really on his last legs of his distinguished big league career - the following highlights would have led anyone to believe the all-time strikeout king was simply ageless.

Ryan was seriously larger than life. 7 no-hitters is insane. Plus he threw 11 or 12 1-hitters too. I thought it was so cool that he threw his 7th no-hitter on the same day that Henderson broke Brock's stolen base record. I kinda miss the days when Ryan was on top of the hobby world.