Is this guy still playing for the Angels? 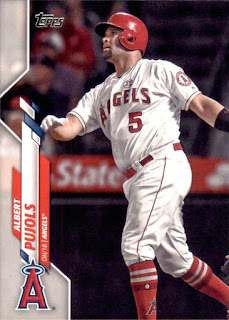 Maybe a 60-game season is just what Albert Pujols needs to stay healthy and put up a batting line that looks somewhat decent - rather than slogging through a normal season that started in late March and likely ended in late September.

Even if Pujols plays in only 30-40 games, I would love to see him put go on a tear - it's probably too late in his career, but it would be nice to see once last burst of dominance from the all-time great.

As far as the upcoming big league season goes, I think it's going kind of unique, but peculiar to have no fans in the stands - maybe I'm an odd duck, but I get self-conscious about watching a game remotely at home while 35,000 other people get to experience watching a big league game in person.

For at least a little bit, everyone seems like they have to watch MLB somewhere other than a ballpark - so maybe I'll be more focused about the game happening on the field, rather than feel a little jealous about the fans in the stands and asking why I'm not where they are.

I am hoping for a tear too!! One of my favorites!!

It would be great if Pujols is a driving force in the Angels returning to the postseason.