I spent $10 for 16 quarter cards and a trio of individually priced singles digging through boxes off one guy who may have been sharing the table space with his buddy - I think of all the loose 'here and now' i.e. 2021 cards I could have picked up instead of these and for $10 total, I just hope I don't lose sleep over the choices I made. 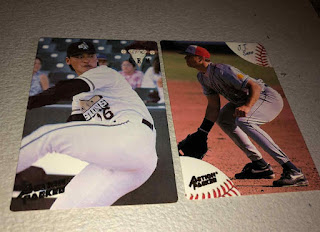 I don't know why I picked up random Chan Ho Park and J.T. Snow cards from the mid 1990s - but the Action Packed minor league cards were unique with rounded corners and raised, embossed surfaces.

Park was a rising star who peaked in Los Angeles, went to Texas 20 years ago as coveted free agent and promptly bombed - ended up as a journeyman who was kind of decent, but never really was able to replicate the success he had pitching his home games at Dodger Stadium.

Snow was a fan favorite as Angel for a little bit when he might have formed a 1-2 punch with Tim Salmon as rookies in 1993 - he was a bit inconsistent with the bat during his time as an Angel and while he broke out past his early struggles, I want to say he was eventually exiled to the San Francisco Giants, where he generally became a more dependable all-around player. 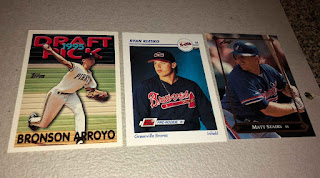 I grabbed a Bronson Arroyo rookie card to squirrel away somewhere - while he was more of a rank-and-file guy in my book, I'll give him his due as a Boston Red Sox cult favorite back in the day and a pitcher who continued to be a solid innings eater for the Cincinnati Reds until all the mileage took its toll on his right arm.

A random pack pulled minor league card of Ryan Klesko takes me back just a bit - where I remember him being hyped as a prospect all the way back in 1991.

I grabbed the Matt Stairs just to have a random card of a fan favorite - who had a significant 19-year playing career.

I guess I'll look it up but I didn't know what the Todd Helton card was so I grabbed it - since I collect him on the down low.

The Walker is a rookie card reprint and while it looks better in hand - the 'registration' on the back is really bad quality.

I don't like grabbing cards of players labeled as part of a rookie subset, when the actual card is not - however the image of a young Scott Rolen juggling makes the 1997 Collector's Choice #15 a keeper for my 'fun' collection. 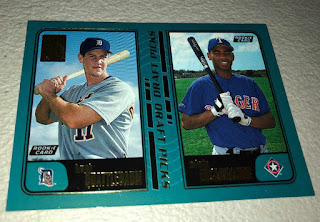 I figured to grab another copy of Hugh Quattlebaum's rookie card after the other I've had for the past 20 years is loose somewhere I cannot recall - I guess the dual player card is more notable for one-time Texas Rangers prospect Edwin Encarnacion, but Quattlebaum was hired just 3 weeks ago as the New York Mets' hitting coach after Chili Davis was fired. 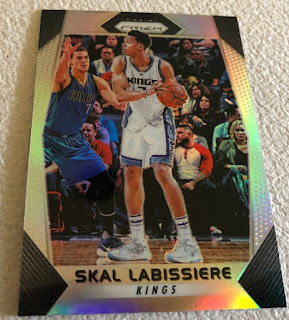 I'm at a blank as to why I picked up a Skal Labissière card - looking closer, I think this is the Prizm cougar parallel.

I don't know if I consider these unique finds, but I grabbed them anyway - a 1988 Topps Mark McGwire Record Breakers subset #3 stamped buyback, a pack pulled minor league card of Austin Romine serial #'d / 25 and a Billy Hamilton refractor for my awesome outfield collection.

Some more cards I found that may not mean much, but may serve their purpose somewhere - a David Fletcher prospect card and a pair of 2019 Bowman Platinum cards of Corbin Burnes, who has turned into a dominant starting pitcher.

Even though it isn't the rookie card, I like the Burnes insert better - it pops a bit more that just the base card. 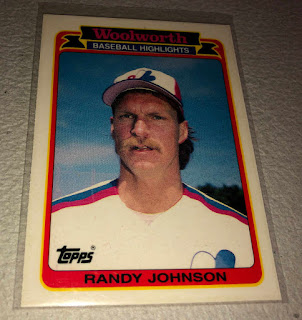 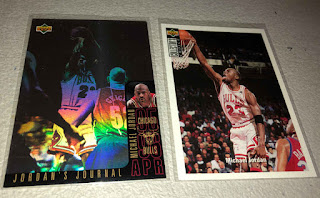 I grabbed these poverty Jordans cards for the prices listed in the back - maybe I paid too much but the hologram caught my eye and I can make believe these are a little different because they are international versions of their U.S. counterparts. 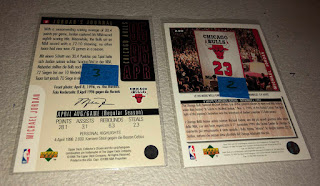 I did a breakdown of the International editions of the NBA sets a few years ago. The holograms are exclusive to the European sets, there is no American equivalent.

That Randy Johnson card is really cool. I will always grab cheap rookie year oddball issues of hall of famers.

I like the Expos Big Unit! And the McGwire is sweet too, since I collect him.