Card show results - getting lost in my finds 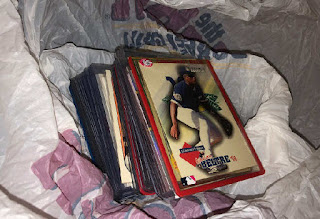 After being a spectator at my niece's soccer doubleheader to close out her season and having lunch with my parents - maybe I got my one chance go back to the show / card shop I'd previously visited.

While I didn’t know how it was during the morning - I want to say there were only 5-10 tables when I got the show and still a lot of empty space in the storefront.

There was one table with a box of loose dollar cards - I was digging around, but it was more ‘here and now’ stuff from just past couple of years and not a deal where I found keepers outright.

I made it to one other table with a display of top loaded cards and loose sleeved cards for $0.50 each - I probably spent about 45 minutes just rummaging through the rows of cards, while another person had already been doing the same before I got there.

I think the setup was primarily other sports, but there were assorted ‘runs’ of baseball to be found just the same - maybe I was a little unsure of what I may find, but I thought this might be my only table, so maybe I should be patient and see if I could make something of my time.

The other person was really into it and was looking to he could get a discount for something like 200 cards purchased - not that I particularly cared, but I was trying to make sure to stay out of his way as he dug into another row of cards.

With no rhyme or reason, I started to get on a mission myself - I didn’t know if I’d have the time to go through the cards I'd pulled and there was a little anxiety about weeding out certain ones while making others my keepers. 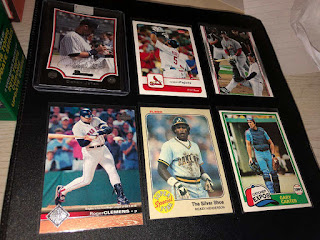 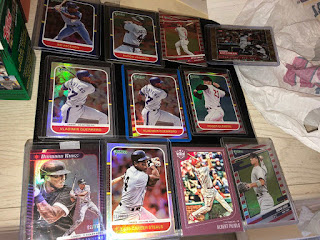 I try to stay away from any non-MLB licensed Panini products on principle, but any loose shiny and/or unique parallels / inserts are fair game - notably when there is star power involved. 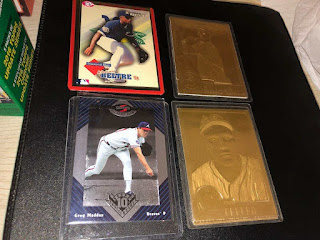 I would have ignored the random Beltre otherwise as just another low end pack pulled minor league insert - but it's a now a nearly 25 year old card that chronicles the future hall of famer's time in the minors, just as he was getting to the big leagues at 19.

The Maddux isn't worth much more than what I paid, but it's an insert I've never seen before - it looks pretty sharp as a binder material card.

Maybe I was aiming for adding some odder looking cards and while the way the cards look a little beat up in-hand [or at least the sealed holders that hold the cards] - I found a pair of 1996 Danbury Mint cards of Duke Snider and Bob Feller, which features a gold leaf surface. 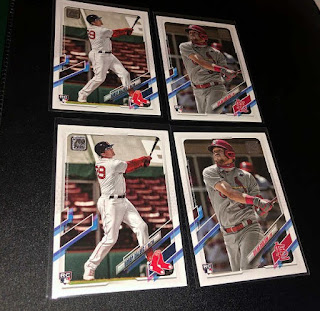 Maybe I lose something in the moment, when I make some of the same rookie cards keepers, maybe multiple times over - however, current year rookies don't always make it to the boxes I'm looking at, so I'll grab them as I find them. 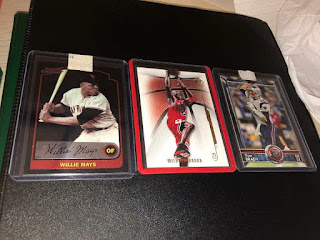 When rummaging through random boxes, I like to do a little GOAT hunting, where I like to make believe that the most basic cards of legendary and iconic pro athletes are keepers - regardless of actual value or relevance. 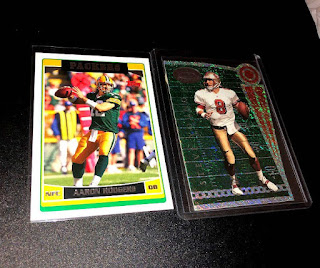 I don't really concern myself with other sports, because if I get serious about it - I feel like the best I can aspire to build on a 'repack collection,' but it's a tease to see all these assorted cards for the taking featuring all these pros I'm casually aware of, except they do not play pro baseball.

I grabbed a second year card of Aaron Rodgers because it just happens to be the closest thing to his rookie year - while he is otherwise holding out so far, he has just been one of these top flight quarterbacks who is tough to go against.

I grabbed a Steve Young card because it was shiny and die-cut - I remember not being able to throw a football at all and even though I was a roly poly kid, I would imagine being able to take the ball [in touch football games] and scramble around like Young did during the years where he was QB1 for the San Francisco 49ers through the mid 1990s. 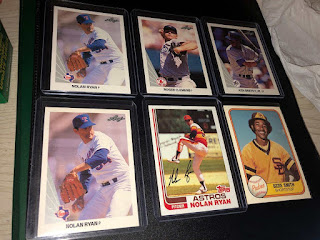 I found some 1990 Leaf cards and while I'd have to pay a pretty price to get any of them actually inked up - it was nice dig out a Ken Griffey Jr., Nolan Ryan [I ended up with two, because I wasn't paying attention] and a Clemens [which I may have already].

Maybe there was some overlapping interest in star cards from the early 1980s and older, even as the junk wax era was at its peak through the early 1990s - maybe a copy of the Ryan was loose among a one-time friend's collection that his mother kept nagging on him to clean up and in passing, I wanted a copy for myself.

The Ozzie Smith maybe a misfit find, from a fugly 1981 Fleer set that is hard to take seriously - however there is something quaint about the card, picturing a younger, smiling Smith as a member of the San Diego Padres.

I almost consider Smith just about a one team guy with the St. Louis Cardinals - but The Wizard established his reputation as a slick fielding magician as a Padre. 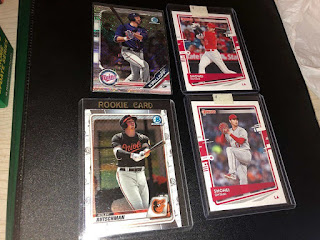 I found one card each of a couple of probable decade stars / binder guys for the 2020s - Alex Kirilloff is an outfielder who became the first player to make his MLB debut in the postseason, penciled into the starting lineup, while Adley Rutschman is probably the top catching prospect in the minors.

Finally there are a pair of Shohei Ohtanis - obvious keepers if I don't have them, even basic, no MLB logo cards from Panini.

Maybe my second pit stop at this card show didn't turn out to be a 'full blown' experience for me, but I was able to dig around and do my thing for a short time - to have some loose cards to take home and dwell on.

I know 1981 Fleer is far from perfect... but it'll always have a special place in my collection because it was the first complete baseball set I ever owned.

P.S. I sure hope Rodgers and the Packers can kiss and make up. Go Pack go!