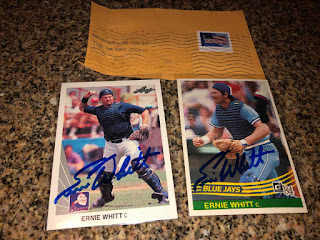 The former big league catcher signed my cards in about 3 months, including a 1984 Donruss and a 1990 Leaf - I wasn't familiar with his playing career, but Whitt had a nice run through the 1980s as a catcher who could get on base and hit for some pop at the plate.

There might be a Mandela Effect going on, but I have a random memory where I might have seen Whitt on TV over 30 years ago - grinding through an at-bat in a Atlanta Braves game, he had the most awkward looking stance to hit from and I guess at his age then, was clearly overmatched by the pitcher he was facing.