I spent the longest time going through a table with seemingly never ending boxes of dollar cards, where I kept finding more cards to add to a stack I’m building up - the table wasn't getting too much traffic, where a few others may have passed by and spent a couple of minutes doing a quick check of things, but I'm the one fiending out, trying to flag some probable keepers.

There is a time element involved where I may give myself an hour or a couple of hours at most - I haven’t even circled back and forth to browse through the entire room yet, so maybe I'm getting self conscious about planting myself in one spot before my time is up.

I was finding baseball from at least the past 25 years, maybe mid 1990s UV-coated inserts, but also a lot of other sports mixed in from a bunch of different years like base cards stars and rookie cards of minor stars - there may have been handfuls of early 1980s stuff sprinkled in.

I'd never seen Perma-Graphics cards in-hand before and was almost tempted to pick up one or two [there was a Davey Lopes, Jack Morris, George Foster] - because they looked so different from your typical flagship Topps, Donruss, Fleer cards from the era.

I was worried about spending so much for cards [where I had 70-80 cards to worry about whittling down] that are kind of just ‘there’ and in the end - I had to let my imagination settle down and settle to pick up so-called priorities.

I feel like I have to quietly put back stuff I’m going through on a whim, where it's out of sight, out of mind - where a next time to pick something I’ve left behind might not happen, but I had to save my bullets.

I was dissapointed there no deals for these dollar cards in quantity, just straight up a dollar each - which was fair enough I guess and maybe as I was leaving the show, I could have swallowed my pride and broke down to pick up 5-10 more cards. 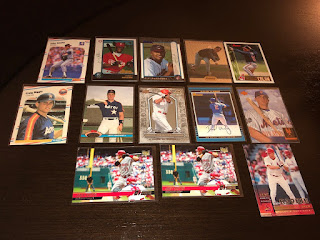 Rookie card stuff - I probably wouldn't seek out any of these cards outright, but I get some satisfaction in picking up a little run of XRCs/RCs featuring pretty good players, fan favorites types and a trio of Hall of Famers. 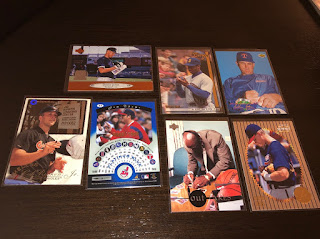 Inking it up adds - I can probably get any particular cards online, if I know what I'm looking for, but it's an accomplishment to find cards in-hand featuring a specific, collecting topics subset theme.

1993 Upper Deck On Deck Nolan Ryan #D20
1995 Megacards Ken Griffey Jr. Wishlist ...A Lot to Live For #10 - this one actually talks about his suicide attempt early in his pro career.
1995 SkyBox E-Motion - Cal Ripken Jr. Timeless Literacy Work #9
1996 Pinnacle Summit retail foil board parallel Chipper Jones #126
1996 Upper Deck Derek Jeter #156
1997 Pinnacle Totally Certified Platinum Blue Jim Thome #47 - on the reverse image, serial #’d 0986/1999; I could have probably left this card, but I collect cards for the images on the back sometimes and it's going to be harder to track any one specific card showing a mini-collection 'hit.'
1997 Upper Deck Michael Jordan Rare Air box set #54 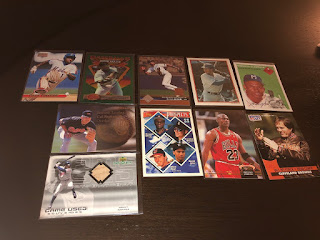 Miscellaneous - maybe this gives me an opportunity to do some free style commentary on cards I picked up, even if what I type out gets a bit too long-winded and/or may devolve into something harder to understand.

1990 Topps Glossy Send-Ins Ken Griffey Jr. #20 - I find myself an old head, where Junior was my original Mike Trout from a past generation over 30 years ago.
1991 Pro Set Bill Belichick #126 - in my collecting life, what was worse than junk wax era baseball cards were junk wax era football [or basketball or hockey] cards.

What I do have here is a card features a coaching GOAT - so I grabbed it, even as a probable 'infamous' mini-collection add for all the chicanery 'The Hoodie' has orchestrated during his time in New England.

1992-93 Stadium Club Members Choice subset Michael Jordan #210 - maybe I'm leaning towards making a PC official, featuring all the cheap Jordans I find.
1993 Topps Finest Kirby Puckett #112 - this could be my first 1993 Finest card, maybe a landmark set I had no real idea about back in the day.
1993 Topps Stadium Club First Day Issue Vince Coleman #195 - this was the last card out I picked out and while I wonder why I subjected myself to picking up a random card of Vince Coleman, whose early high octane base stealing years with the St. Louis Cardinals was drowned out through the 1990s by firecrackers and generally bouncing around as a journeyman.

However there is some 'dirt fetish action' on the card and the little First Day Issue stamp makes the parallel a keeper - even if I don't have the original base card in-hand, at times I'd rather have parallels for my mini-collections.

1994 Topps SS Prospects Derek Jeter #158 - I don't like multiplayer cards of prominent players who end up with one or more random guys, but this second-year big league card of Jeter, chronicles his rise, where he was still plying his trade in the minors.
1994 Topps Archives ‘54 Roberto Clemente #251 - out of all the retro cards I found featuring Hall of Fame legends and icons, maybe this is the one I wanted to put away in my pocket because it chronicles the time Clemente spent with another big league organization's minor league squad.
1996 Fleer Update Smooth Leather Cal Ripken Jr. #9 - this ends up being a binder material card to put away.
1997 Upper Deck Derek Jeter #440 - I funnel my 'star cards' towards my decade / binder stars collection by default, where my player accumulations supercedes any mini-collection priorities.

In some cases, I'll relent to make a card like the Jeter a mini-collection add - with a little dirt fetish showing or even a bit of signage going on, where you can make out a certain brand of beer.

2000 Upper Deck MVP Game Used Souvenirs Manny Ramirez bat #MRB - I was excited to find a bat card out of the dollar box, even if relic cards haven't been a thing for the past 10-15 years and while I probably collected it just the same, UD MVP was more a budget collector brand.

A lot of these cards would have caught my eye too... especially the two Colon rookie cards. Those were awesome finds.