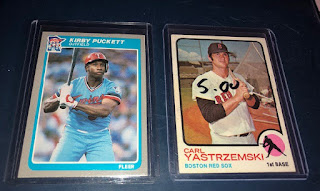 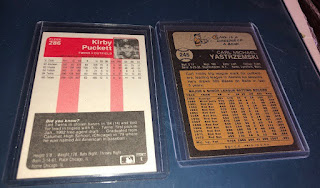 I made a mid week pit stop at a potential LCS storefront and new card show set-up twice a week - I took look a around and maybe there was four or five tables along with the shop set-up, so it wasn't looking too good.

I did realize it wasn't the weekend and it may take time for guys possibly setting up - to be on that weekday grind with real life stuff in the way.

I don’t know if it was the same guy at this particular table I stumbled on, but I recognized some old school / vintage material from the very first show I attended this year - there maybe a couple of binders with vintage football sets on display and a showcase with some modern and / better stuff.

The Yastrzemski was the mutton chops Yaz card featured an episode of The Simpsons, so there was some novelty there - I saw the Yastrzemski displayed before, but the table setup changed up over the past several shows.

With ‘here and now’ interests taking priority, maybe the Yaz was just another card collecting dust in a seller’s stash somewhere - but I was able to to find it again today and it’s worth $5 to have it in-hand.

Come to think of it, I’ve never had a Puckett rookie so it maybe a start to looking for his more common rookie cards - the 1984 Fleer Update is the XRC to have, but that maybe a card that I'm not going to run into anytime, while I still kind of think his 1985 rookies were kind of ‘second tier’ at best.

Puckett was a larger than life superstar during the junk wax era and I ended up with his share of cards - he was a gamer and was on his way to posting more significant counting number through his mid 30s, sbefore he was diagnosed with glaucoma late in his career.

When he was playing, there was never a bad thing spoken about him on or off the field - but he was a flawed human being, who wasn’t the most savory of characters, especially after retirement.

Nice cards. I'm glad mid 80's HOF rookie cards haven't soared to ridiculous prices during this hobby boom. Seems like you got a great deal on that Puckett.