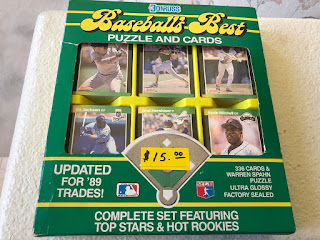 I’m trying to make something out of what was left of my time, going around to see what may catch my eye - I ended up seeing a 1989 Donruss Baseball’s Best set I relented to pick up.

I remember being envious of a childhood friend in possession of a loose Ken Griffey Jr. rookie year card laying around loose in his room 30 years ago - I finally got a graded version of the Griffey Jr. back in 2006 and didn’t realize centering on the back of the cards were generally ‘off.’

Even though it’s a nearly worthless card of a big league pariah - maybe another highlight was an early MLB card of Sammy Sosa, his only big league card from 1989. 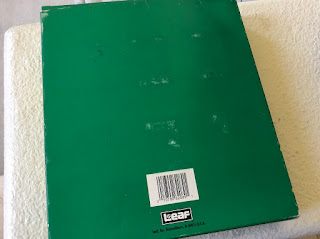 I thought the cards were still factory sealed, though that might not be the case with the outer packaging - the cards are still in bricks wrapped in plastic, though might have been banging around in the display box after all these years.

I don't know if I should try to keep things 'as is' and preserve the set as best as I can or if I should just break things up - so I can make sure the Sosa and Griffey Jr. cards are actually in-hand and see what they look like as far as condition goes. 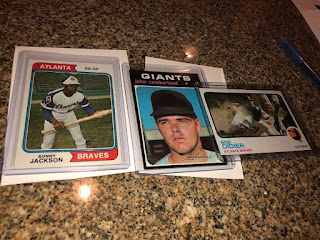 I stumbled upon a table with a ‘3 for $1’ vintage box - I'm up for having real, old cardboard in-hand, but at this point just haven't been that collecting to gravitate to them.

At the table, maybe the three or four row box of cards were set-up too neat, where there isn't that lure of not knowing what I may find - when clearly it's commons separated by year [from something like 1969 Topps through some scattered early 1970s years].

For the just the rank-and-file commons, I think the 1969 Topps tends to be boring and generic, while other vintage years don’t quite inspire the right perspective in me - I grabbed a trio featuring a 1974 Topps Sonny Jackson #591 [possible TTM], a 1971 Topps John Cumberland #108 [possible TTM] and a 1973 Topps Bob Didier #574 that has a pretty definitive tools of ignorance, plays at the plate image pictured.

I have 1990 ProCards AAA cards for Jackson and Cumberland [Cumberland was a one-time Angel] but those are kind of ugly cards picturing them as coaches - I wanted actual cards from their playing days and kind of found what I was looking for.

That 89 Donruss Baseball's Best set is a cool find. I remember trying to track down that Sosa back in 1998.