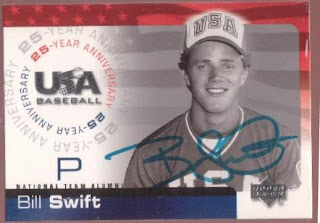 Swift had a serviceable Major League career, though he wasn't the most durable pitcher - he enjoyed his best season in 1993 when he won 21 games and pitched in a career high 232 innings, teaming up win 22 game winner John Burkett to give the Giants a one-two punch at the top of their rotation.

I sent my autograph request to Swift late in December 2010 and got it back earlier this week - the card I needed signed for my set was from a 2004 Upper Deck USA 25th Anniversary boxed set.

Play at the Plate said...

I still need to send some TTMs to him.